In 2013, I wrote a program in Node.js called sshp. This was right around the time I was investing heavily into learning node, and honestly having a blast doing it. Node is quick and fun to write, and with only a couple hundred lines of code, I was able to write node-sshp.

node-sshp is a command line utility that acts as a parallelizer for ssh. It works by taking in a file containing a list of hosts to connect to and looping over each host firing off an ssh command in parallel (with a configurable maximum number of concurrent processes). The tool’s description is:

sshp manages multiple ssh processes and handles coalescing the output to the terminal. By default, sshp will read a file of newline-separated hostnames or IPs and fork ssh subprocesses for them, redirecting the stdout and stderr streams of the child line-by-line to stdout of sshp itself.

Writing this tool in Node was an obvious choice at the time: the company I was working for was using Node heavily, and this tool was written specifically to be used at my job. Managing multiple concurrent child processes and IO streams also made Node the obvious choice.

Fast-forward eight years, and I decided it might be fun to revisit this code. I still use sshp at home and rely on it heavily; I don’t know if the company I worked for in 2013 is still using node-sshp, however. Looking at the existing code in Node, I thought it would be fun to try and rewrite it in C.

Jump to the finished program.

node-sshp has 3 modes of execution:

The first 2 modes, line and group, operate in largely the same way, differing only in how data is buffered from the child processes and printed to the screen. Line mode buffers the data line-by-line, whereas group mode does no buffering at all and prints the data once it is read from the child.

The last mode however, join, buffers all of the data from all of the child processes and outputs once all processes have finished. Instead of grouping the output by host, it is grouped by the output itself to show which hosts had the same output.

My goal in this rewrite was to keep sshp largely the same. Only the following options have changed, the rest of the user-facing interface remained exactly the same:

The Decision to Rewrite

The truth is, I didn’t really have any reason for wanting to rewrite this code other than it looked “ugly” to me now. I found many places that I could “do better”, and a lot of places that had repeated lines of code with a single variable changed. Basically, there was a lot of sloppiness in the code I thought I could clean and make better, if for no other reason than to make myself feel better about the code.

I don’t think 2013 me would have ever attempted to this. I wasn’t at all confident in my ability in writing C (in fact, I was afraid of it and thought I would just have bugs and memory leaks everywhere). Now, in 2021, I’m still not super confident, but I think I’m just naive enough to start a rewrite and stubborn enough to finish it.

The Process of Rewriting

Rewriting from Node.js to C brought a lot of challenges. Like, a lot. Node has a lot of built-in facilities for handling multiple asynchronous processes and IO streams (thanks to libuv). On top of that, the JavaScript portions of Node are all single-threaded. When considering how to approach sshp.c, I had to decide if using threads made sense. Basically, with C I had a lot of options, which meant a lot decisions I had to make.

As mentioned above, sshp has 3 modes of execution. When I originally wrote node-sshp, this was something that I hadn’t considered explicitly - it sort of just so happened that there was a default mode, a -j mode, and a -g mode that popped up as I was iterating on it.

Because of this, it was easier to approach the rewrite since I had the blessing of hindsight to know how the program should look. Writing a new program that matches the interface of an existing program is similar to composing a cover or a remix of a song as opposed to writing one completely from scratch - it’s an easier process since a lot of the foundation is already laid.

In C, it was up to me to figure out how I was going to approach this. I could just pull in libuv like Node.js does myself and have sshp depend on it, but I wanted to have as little dependencies as possible.

I made the choice to use epoll to simplify the process a bit. This would limit the number of operating systems that sshp will work on, but I mainly wanted to target the two operating systems I use the most at home: SmartOS and Void Linux, which both support the epoll interface natively. Other than the epoll dependency, sshp should work on any POSIX system with a C compiler.

Note: Since I originally wrote this blog post I have updated sshp to work with kqueue as well as epoll. You can see the update below for more information.

I originally imagined that I would need 2 threads. In fact, in the early commits of sshp, you can see how this was originally implemented with threads. It looked something like:

At a certain point, I realized I had semaphores signaling each thread back and forth that 1. the child had executed and 2. the child needed to be reaped. Because they were mostly just blocking on each other to do work I eventually just pulled out the threading and just made it all a single thread with non-blocking IO from the child processes.

How many lines of code is sshp?

The C version of sshp is about 5x more lines than the Node version - it contains more lines of comments than the entire source of node-sshp.

You rewrote a program to have 5x more lines of code and less cross-platform compatibility?

Short answer: yes. I at least had fun during the process :).

The original program didn’t have all of the same functionality from the beginning of its life. For node-sshp, it took about 2-3 days to get the line mode and group mode working and another 2-3 days (months later) to get the join mode working.

For sshp in C however, it took about 2 full weeks of working to get it working. It was significantly faster to iterate in Node than C - but wow, am I way more proud of the code in C than I am of the code in JavaScript!

sshp can be found on GitHub:

I had a ton of fun working on this, and am really happy with how it turned out. I hope you enjoy it! :).

See the GitHub page linked above for more information and usage.

Also note that the hosts file can be passed in via stdin if -f is not supplied.

Run with -d to get debug information, making it clear what sshp is doing:

Run with -g (group mode) to group the output by hostname as it comes in. To illustrate this, -m is set to 1 to limit the maximum number of concurrent child processes to 1, effectively turning sshp into an ssh serializer:

Run with -j (join mode) to join the output by the output itself and not the hostname: 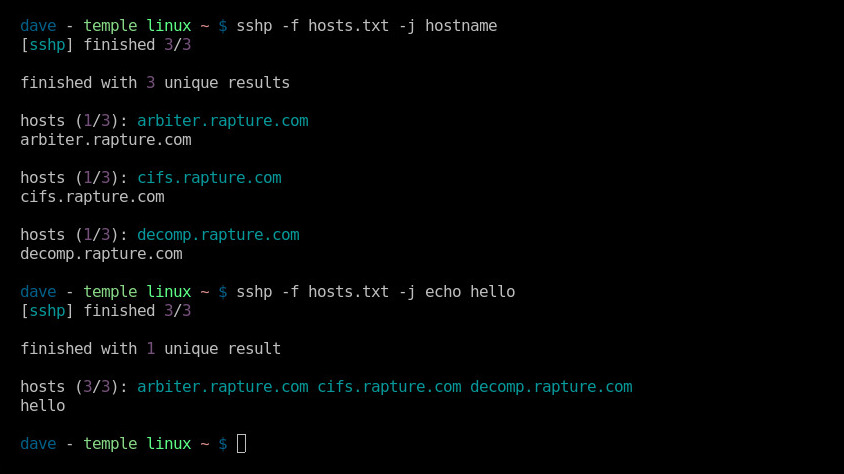 Send the sshp process a SIGSUR1 signal to print out process status information while it is running. In this example, a signal was sent twice to the process: 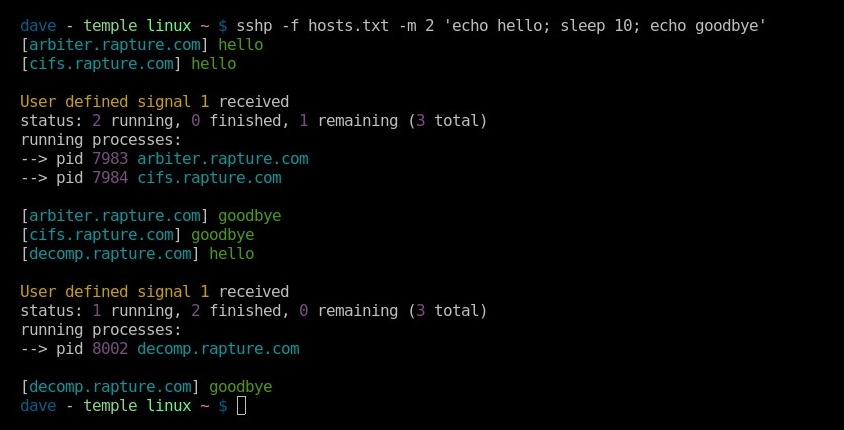 A little over a week after finishing up this blog post and sshp, I decided to actually look into kqueue and see how hard it would be to implement alongside epoll. This task turned out to be a lot easier than I initially planned since kqueue and epoll have very similar interfaces when it comes to watching for file descriptor read events.

This pull request contains all of the code to get kqueue supported. From a high level, I decided to start by abstracting the existing and working epoll logic in sshp into its own interface called FdWatcher. The interface works with the following functions:

At first I was able to get this interface working for epoll only. Once that functioned properly, I started implementing kqueue support by using simple #ifdefs. After just an hour or so I had a working interface on my Mac using kqueue! This approach turned out to be really great in my opinion. Starting with a working implementation of epoll made it easier to decide what the FdWatcher interface should look like and fit kqueue into it.

The new code count is:

Now, sshp works on systems with kqueue - like MacOS and FreeBSD!