I purchased the ThinkPad X1 Carbon (6th Gen) laptop over a month ago and have been happily using Void Linux on it for the last couple of weeks or so. The battery on this thing is absolutely amazing - without any tuning specifically for the battery itself, I can get really great battery life.

I posted about my install on reddit and was asked specifically about the power usage. I said:

I keep firefox with ~15 tabs open and have a couple terminal windows open - that’s my daily workflow, and I can get like 8 full hours on this laptop! Sleeping however is a nightmare. It doesn’t support s3 out of the box and I have yet to try this patch to enable deep sleep - i’ll report back when I do. When the laptop is suspended it’ll last about 48 hours before it is completely dead (WHICH IS TERRIBLE).

However, my friend Mike showed me this tweet showing that the latest ThinkPad BIOS update added support for better sleeping on Linux! I really wanted better battery life when sleeping, so I jumped into trying to update it as fast as I possibly could - and in that process, I learned a lot and failed pretty hard at first. This is my journey into getting a good nights sleep on my ThinkPad with Linux.

The first thing I tried was what I saw in the tweet linked above: pull in the latest BIOS update with fwupd. Since my laptop was supported for BIOS updates with Linux, I was very excited to test out this method.

I searched for fwupd in my package manager and found it:

I installed it with:

And finally decided to test it out with:

This did not work out at all like I planned it. For some reason, my system was marked as not updatable. I wasn’t really sure what happened here, but luckily the get-devices subcommand was a little more helpful:

The UpdateError line was particularly telling:

I was able to mount the efivars filesystem to the expected location with:

I ran get-devices again but was met with the same error. I had to kill the fwupd daemon that was started automatically for it to pick up the changes.

Just a side note here - I ran fwupdmgr as non-root initially and it resulted in fwupd running as a daemon as root via dbus. I guess this is convenient, but I’m not a huge fan of this behavior.

Hooray! fwupdmgr finally saw the update available for my BIOS. The last step was to stage this update with:

fwupdmgr doesn’t know how to reboot my operating system, but that’s fine, because I do:

The machine came back up and brought me to my normal grub screen to unlock my encrypted hard drive without any indication that the BIOS had been updated.

I tried redoing the update process with fwupdmgr --offline update, but nothing seemed to cause the BIOS to update. The process itself worked, meaning that /boot/efi/EFI/void/fwupx64.efi was created along with the fw/ directory to store the cap file with the updated, but I could not get it to boot that to save my life.

I started my laptop and hit F12 to bring up the boot menu and manually selected the Linux Firmware Updater option (which uses the fwupx64.elf file), but it would just go to a black screen for a split second and then would go right back to the boot menu select screen.

I modified my BIOS to boot from the Linux Firmware Updater option first, but still it didn’t work.

I then came across this comment on GitHub for a somewhat related item and noticed that I had only installed fwupd and not fwupdate. I installed fwupdate with:

I checked out the directory mentioned in the output above and saw it had one file:

I compared that file with the fwupx64.efi file I already had in /boot/efi/EFI/void and noticed they were different (they had different sha256 checksums). I copied over this new file with:

And still nothing. I could not get this update boot at all.

It was time to take a different approach. I decided to download the update for my laptop directly from the Lenovo Support Page. Lenovo distributes it as a bootable ISO file that is meant to be burned to a CD and installed regardless of whatever operating system is currently installed. I don’t have a CD drive on my laptop, so I instead opted to install it onto a bootable USB drive.

I downloaded the ISO with:

In order to properly copy it to a USB drive, however, I had to convert it to an IMG file. I did this using the geteltorito tool:

I then determined the name of my USB stick:

With that I “burned” that image to the USB stick on /dev/sda:

I verified this worked by ensuring a new partition had been made on /dev/sda:

I then rebooted the laptop, pressed F12 to bring up the boot menu, and booted from the USB hard drive. It then brought me to a BIOS upgrade page and I was able to follow the steps there and install the latest BIOS!

After the install I then pressed F1 during the boot sequence to open the BIOS and configure my machine for Linux style sleep: 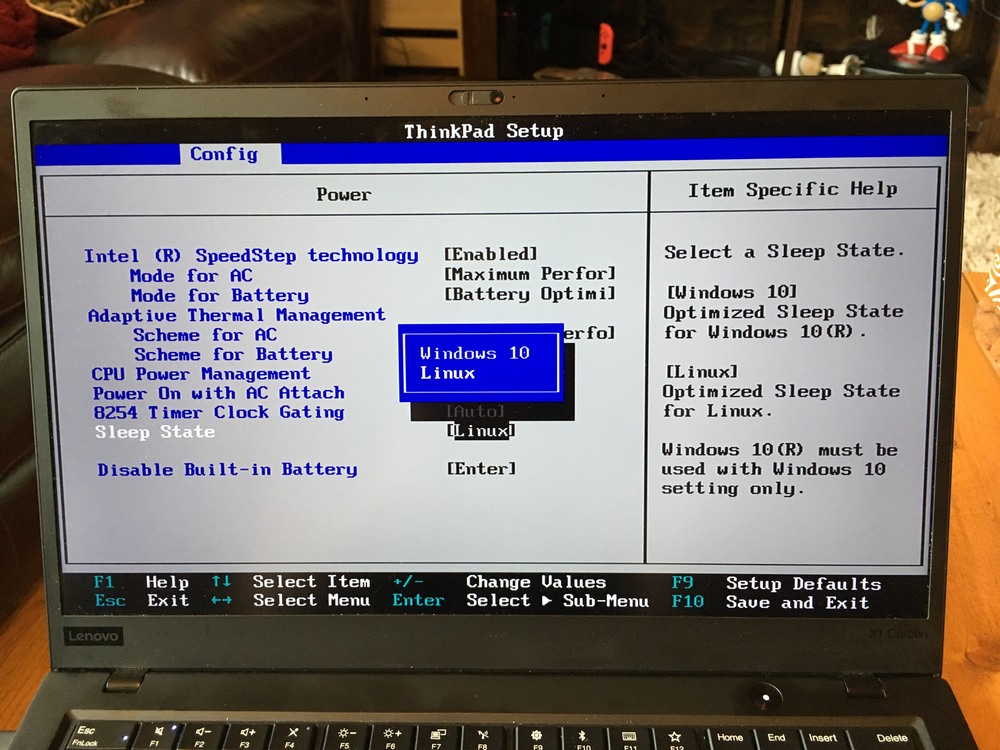 With that, my machine now supports proper s3 deep sleep on Linux! I verified this with:

The added bonus here is that my machine now properly wakes up when I open the lid as opposed to having to press the power button to wake it up manually.